The sight of a dolly train of ULDs moving around an airport or a truck loaded with ULDs moving down the road is common enough occurrence to anyone involved in the air cargo industry.  But there is more to this activity than meets the eye. Indeed without proper care and attention, the equipment and practices used to move ULD from place to place can have a significant impact on the condition of the ULD.

The most common form of ULD transport is of course the dolly. Seen in hundreds if not thousands at any airport handling wide-body aircraft, these pieces of equipment are generally taken very much for granted. However, a poorly manufactured ULD, one that is not in compliance with the IATA standards or a poorly operated dolly can lead to considerable ULD damage.

The basic requirements for any piece of ground support equipment which will come into contact with ULD are contained in the IATA AHM Section 911. For the ease of ULD operations, this section is reproduced as appendix C of the ULD Regulations. Nothing in this specification is particularly complex but failure to follow the standard can easily result in damage to ULD. Typical issues at the design stage can include:

Incorrectly maintained dollies will be difficult to operate.  Once the rollers or other support mechanisms become worn or rusty, they do not turn easily resulting in difficulty in moving the ULD across the dolly, particularly of course when heavily loaded.  This can lead to the use of external devices to push the ULD which in turn can lead to damage to the ULD. Lack of attention to the stoppers can result in them being difficult to use and may result in them not being properly raised leading to the possibility of the ULD coming loose during transport.

Matching the correct size of dolly to the correct ULD is an absolute essential.  Without 100% observation of this essential requirement, the ULD will be able to move around during transport with potentially very negative outcomes.

The height of the dolly is also of course an important standard.  Any significant height difference between the dolly and any other piece of GSE/storage equipment will result in significant operational difficulties and put the ULD at risk.

The speed of dolly towing will also have a potentially serious impact on ULD. Most dollies are unsprung and have solid rubber tires. Anyone standing next to a dolly train as it passes by will know that everything is rattling, and this gets particularly severe on any kind of gradient which are typically provided with a rough surface in order to improve the grip of the tractor tires. Typical dolly towing speed limits are 25 kph, and the use of speeds above this will expose the ULD to a very high level of vibration which can easily cause damage to the ULD structure over the long term.

When it comes to transport of ULD on roads or even in some cases where trucks are used in place of dollies for ramp operations there are a number of additional considerations to be taken into account:

Unlike dollies which tend to be all fairly similar, when it comes to road transportation there are a very wide range of different vehicles being used, ranging from extremely sophisticated special-purpose vehicles commonly used in Europe to the simple flatbed trucks commonly used in Australia and New Zealand, with smaller partly enclosed vehicles in between.

There are 2 major factors when it comes to trucks:

Firstly, with the exception of the transport of forkliftable base containers or empty ULDs the vehicle must be equipped with roller bed system, which should provide support equivalent to the requirements listed in AHM 911.

And secondly any truck must have a suitable form of restraint to ensure that the ULD, empty or loaded stay in place regardless of the acceleration forces the track will experience as it accelerates or breaks or goes round corners. Fully enclosed trucks, as used in Europe, having retractable roller systems so that the ULD rest directly on the floor when in place and are fully surrounded by a solid truck body are obviously the best solution in terms of security of the ULD and also for the best prevention of damage to the ULD. Where such trucks are not available then the process of securing the ULD to the truck and becomes more complicated. Of primary importance is some kind of stopper device that will prevent the ULD moving to and fro on the roller bed, such systems need not be sophisticated, a simple pin solution will work very well. Where things start to go wrong is when some kind of rope or strap applied over the roof of the container is utilized to hold the container in place. This type of restraint does not take into account the considerable G force container will experience as the truck goes around the corner, tending to throw the container to the outside of the curve. Where over the roof restraint is being used this G force can apply             some tremendous loads into the roof of the container, far greater than it is meant to withstand, the result is a bent or snapped roof frame. Things get even worse with the use of straps having ratchet buckles. It is not difficult to apply a very considerable force through the use of such equipment and one can see containers loaded on trucks having such straps with the roofs bent down through a considerable amount.

It is also probably true to say that the average person loading and/or driving trucks carrying ULD will have received very little in the way of training about the real nature of ULD as aircraft equipment that have to be maintained in airworthy condition. In general ULD on trucks are treated as just another piece of cargo, not requiring any particular attention and not getting any.

AND, a final alert which applies to any kind of transport of ULD:

Always secure container doors in either fully closed or fully open position and also stow any kind of loose parts of nets so that they cannot be snagged on GSE, etc.

So there we have it, the transport of ULD whether by dolly on airport or by road on a truck or any other combination is a commonplace activity being carried out in countless locations by countless operators, most of whom unfortunately receive very little in the way of training about ULD. This article endeavours to highlight some of the most obvious areas of concern. 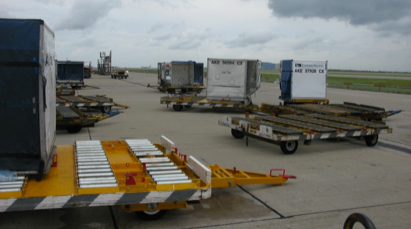 Dollies can be found all over most large airports. 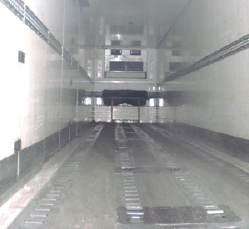 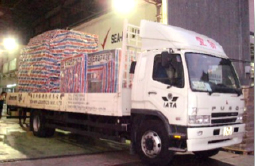 Typical truck load of ULD in Hong Kong. Many thousands of ULD are transported off airport every day in this manner in Hong Kong.