With very few exceptions, ULD spend most of their existence in the possession of companies who do not own them.  In a typical duty cycle, a ULD may move from a freight forwarder or even a shipper through a trucking company to a cargo terminal and to a ground handler before it finally makes it onto the aircraft.  This entire process may be repeated in reverse at the destination.  During a single cargo movement, a ULD might be transferred between different parties as many as a dozen times.

On one hand, we can say that the air cargo industry, as it functions today, could not operate without such flexibility but, on the other hand, there is considerable evidence that this high degree of transfer of ULD between parties can create very considerable challenges for the ULD owners.

Around 40 years ago in the early days of ULD, the airlines set up a system whereby a ULD being transferred beyond airlines in-house tracking systems from one airline to another can be properly recorded and controlled giving the owner airline a degree of visibility as to where its ULD has gone. This system, known as the IULDUG  System (interlining,tracking and demurrage system), was originally created by IULDUG, an IATA Interest Group at the time. The IULDUG System was later acquired and is operated by ULD CARE and continues to  provide the backbone database which records and controls all these transfers.  Airlines continue to have visibility of the status of the ULD and can collect demurrage when the ULD spend more than 5 days under the responsibility of another carrier.

However, once ULD move outside of direct airline to airline transfers, it is a whole other story and airlines face a continual challenge to establish just where and with whom their ULD may be at any point in time.  Can you imagine being able to rent a car from Avis or Hertz at an airport without signing any documentation.  Moreover, imagine Avis or Hertz being quite okay for you to hand that car onto your friend who says he’ll take care of it and give it back later to the original owner!  Hardly likely, yet, when it comes to ULD, it seems that there is an industry-wide expectation that ULD can simply be picked up, retained, moved, and passed on to other individuals or companies without any responsibility for the ultimate return of the ULD to its owner. With a global fleet of roughly 800,000 ULD’s, having a replacement value of around US$800 million, this situation is clearly unsustainable.

This system is ready to track ULD assets beyond airlines across the ULD Logistics Chain to include all parties of ULD asset interchange.

Over the years, there has been much talk about equipping all ULD with RFID chips so that ideally it would be possible for an airline staff to use some kind of receiver to sweep for its ULD’s.  It would take many articles to cover the numerous discussions on this subject, but regrettably many years on the economic and technical challenges seem insurmountable.  Luckily in recent years, with the spectacular penetration of iPhones and similar, there appear to be opportunities to transfer quickly and accurately data relating to the location of any particular ULD at any particular time and this provides some exciting possibilities to create new levels of effectiveness for ULD control.

While the IULDUG System is ready to track ULD assets beyond airlines, there first needs to be some basic changes in currently established procedures – namely the creation of a universal UCR.  Of course it could have been possible to start with a clean sheet of paper and create a second UCR  resulting in the industry having to work with 2 UCR’s, one for transfers between airlines and a second one for transfers between other parties.  This would clearly not have been the best solution.  The focus has been to amend and enhance the existing IATA ULD Control Receipt (UCR) in such a manner that it will be able to accommodate a much wider functionality.  Below is an example of the current UCR being used. 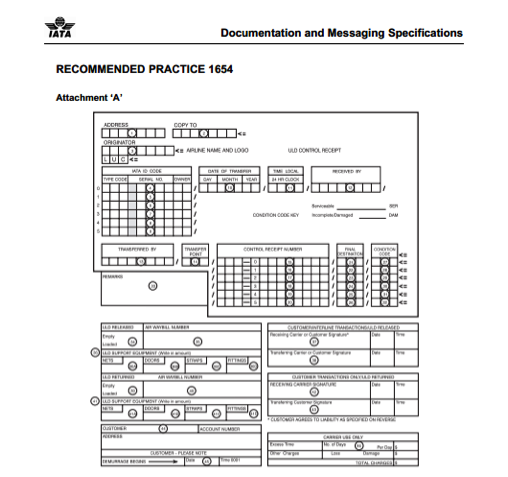 A working group under the auspices of ULD CARE spent considerable time during 2013 reviewing the current format of the UCR and developing a series of amendments and adjustments to make it applicable for this wider purpose.  While this process has been rather lengthy, there are grounds to believe that the end is approaching.  Although the UCR is a document dedicated to ULD operations, it is also used to create LUC messages which are used by airlines to communicate ULD transfers over the SITA messaging system. Therefore, any change to the UCR could have wider implications and therefore it was necessary to involve various other bodies within IATA.  Given the current status of these reviews, we could expect the new format of the UCR to be published before the end of this year, enabling its use in a paper form at least.

The next step will involve the development of the necessary standard electronic messages so that the data captured in the paper form can be transmitted effectively between the parties. This step will open the door to paperless transfer of ULD, bringing in the situation where all the requisite details for any ULD transfer are captured on a smart phone and made available instantaneously to the ULD owner.

ULD operations are continually plagued by the lack of real time effective information regarding the location of ULD assets.  As things stand today, it does appear that the potential to achieve a really significant step in the right direction is close to being taken and that perhaps, in the not too distant future, ULD owners will actually be able to know where their ULD are all the time. As was pointed out at the beginning of this article, no car rental company would ever accept the sort of haphazard and informal exchange mechanisms under which ULD assets are transferred from party to party without a signed contract, duly registered in their system. With the impending arrival of the re-designed universal UCR (both on paper and in an electronic version) and the resulting opportunity to capture all ULD asset exchanges on the IULDUG  System (including ULD condition and peripheral equipment), airlines/owners can soon look forward to an orderly, user friendly and cost effective management of their ULD’s. It will protect their ULD assets from the cost of loss or damage incurred  to ULD while out of the airline’s direct control.