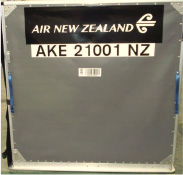 kind of identification marking but far fewer people would actually be able to explain the system and standards upon which these markings are based.  Yet the global system whereby ULDs moved between different parties in different locations around the world would not work effectively if it were not for the existence of this system.  For anybody having even a passing involvement in ULD operations, an understanding of what these codes mean is essential.

The basis for any ULD marking is that 10 digits, being a combination of letters and numbers, are used to define the necessary characteristics of that particular ULD. With the system working correctly, there should never be a duplication of this 10 digit code and every one of the 800,000 ULDs in circulation today should carry a unique code.

The primary system of ULD identification is governed by IATA Resolution 686.  This resolution, which is binding on all members of IATA, has been in existence for many years and is referenced in many other industry documents including aircraft weight and balance/loading manuals. Of course, some operators of ULD may choose to deviate from this system – and this is their own choice.  However, if those ULD were to be utilized on another airline’s aircraft, it would create considerable problems.

For a formal definition and explanation of the IATA ULD identification system you should refer to standard specification 40/1 contained in the IATA ULD Regulations Manual, one small section of which is reproduced here

So what do these codes all mean?

First of all, some people might ask what is the difference between an LD3 container and an AKE container, as these 2 different terminologies seem to be used to describe what is apparently the same piece of equipment. The answer to this is that codes such as LD3, LD7 etc are based on a system used by ATA (Air Transport Association of America, now known as Airlines For America). These ULD codes were issued by ATA and were quite widely used at one time.  However, the IATA Identification Coding system has become much more internationally acceptable and is currently more generally used.  A table containing cross-reference between the IATA and the ATA codes can be defined in appendix D of the IATA ULD Regulations.

The first 3 letters are used to define the physical characteristics of the ULD, the next 5 digits are typically the airlines unique serial number for that ULD and the last 2 characters are the airlines IATA code.

Looking at each of these in more detail:

Position 1.  This will always be a letter, and is used to define the category of ULD. The most common letters are

In all there are 17 different categories of ULD listed in the IATA standard. Additionally the letters X, Y and Z may be used by an airline for its internal use, this may be necessary where an airline has a particularly unusual type of ULD but it should be noted that when an airline does utilize one of these 3 letters, the rest of the industry will be unable to identify the category of the ULD.

Position 2.  This will also almost always be a letter but on very old ULDs (marked before 1984) position 2 could be a number. Position 2 is used to define the base dimension of the ULD, irrespective of whether it is a container or a pallet, this letter corresponds to a particular length and breadth of the base. There are 15 such letters corresponding to different standard dimensions. It should be noted that aircraft manufacturers will reference these IATA codes in the weight and balance manuals and therefore it is essential that each ULD is correctly marked according to its base dimensions. Again the letters X,Y and Z are available to cover those types of ULDs whose base dimensions cannot be found in the standard 15 sizes, and as with the categories of ULD, these may be used by airlines but it should be remembered that the information is of no use outside that airline.

Position 3. This is a little more complicated because it works differently for containers and for pallets.

In the case of pallets and nets, the position becomes even more complicated because of possible incompatibility between these 2 items. For instance, although a PAG and a PAJ pallets may look physically the same, they are actually from a mechanical performance point of view slightly different and it is only through checking the weight and balance manual of the aircraft on which they will be used that it can be certain that the pallet is of the correct type.

Positions 4 thru 8. These are basically the unique serial number identification for each ULD, allocated by the ULD owner and used to track the ULD. Although this seems simple enough and while generally today most ULD are marked with 5 numerals, there are some considerations to be taken into account:

Positions 9 and 10. These are the Owner Code, a unique 2 character code assigned to airlines and non- airlines by the IATA Code Administration Coordinator. The protocols under which IATA allocates and controls these codes are too complex to include in this article.  What is important for any ULD operator or owner to understand is that the use of any code other than that allocated by IATA can potentially lead to considerable confusion. One common misuse of the system is to use 3 characters instead of 2, as most paper and computer-based systems are set up to only accept 2 characters.  This means that any kind of data entry will result in one of the 3 characters being dropped off, thus creating a completely different ULD identifier.

In addition to the standards defining ULD identification codes, there are a couple of important requirements regarding the physical characteristics of these codes:

It probably goes without saying (but nevertheless requires mention as it is an all too frequent occurrence), the re-marking of any ULD without the clear approval of the owner of that ULD is never under any circumstances permitted.

So there we have it.  Hopefully this article serves to throw some clarity on what is quite a complex subject.  ULD CARE would certainly recommend that anybody involved in ULD operations at any point in the process be fully familiar with every aspect of ULD identification through the purchase of a current copy of the IATA ULD Regulations, this being the only definitive source of the current standard.