Air cargo straps, aka cargo straps,tie down straps or just plain straps are probably one of the  most misunderstood components of the air cargo industry, whether found on a  built-up pallet load, or in a pile in the corner of the cargo shed, or adorning a freight forwarders truck.  There are an amazing amount of these straps in existence combined with an amazingly small amount of knowledge about their proper use – this is not a formula for air cargo safety.

Like many other practices in the air cargo industry, the use of straps has evolved over time.  Yes there has been a certain amount of instruction in the use of straps contained both in the IATA ULD Regulations and in its predecessor, the ULD Technical Manual, basically reproducing the contents of ISO 16049.  A certain amount of guidance can also be found in the IATA AHM but there is a bigger issue here which is that from the very beginning of palletized cargo, the weight and balance manuals were created on the assumption that the primary restraint would always be a cargo net and that if and when straps were to be used, they would always be a secondary restraint, underneath the cargo net. The FAA is very clear about this: the use of a pallet and strap without a net is not, in their definition, a ULD. 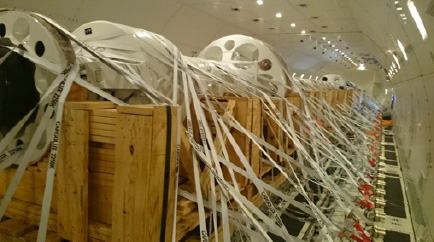 Of course as the cargo industry developed and started carrying more and more  cargo that was not necessarily suited to go underneath a  cargo net such as a vehicle, a helicopter, other large items and particularly overhanging items, the use of straps  without an accompanying cargo net became more commonplace. Furthermore as the use of floating pallets with the load tied directly to the floor of the aircraft grew in popularity, this also increased the usage of straps as primary restraint.  But here is the kicker:  not only was there no Minimum Performance Standard (MPS) for straps until just a few years ago, but also the application of straps to items of cargo requiring special restraint was left up to individual airlines to do as they saw fit, there were no industry standards, the strap manufacturers did not lay out how the strap was to be used, so it was pretty much up to the person on the spot. 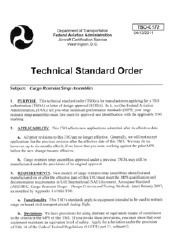 Moving into 2016 this has all changed. First of all in 2011 the FAA published TSO C172 “Cargo Restraint Strap Assemblies”, creating for the first time a comprehensive MPS for straps of any type. The IATA ULD Panel responded to this initiative by establishing that from 1Jan 2016, only TSO approved straps should be used, and in the intervening period a large number of airlines have indeed transitioned away from non-certified straps to TSO C172 approved straps.

This in itself might have been relatively unremarkable but the investigation into the crash of National Air Cargo flight 102 highlighted once again that the use of straps was not following any kind of prescribed practices and that a great deal of practices could be unsafe.  These findings have led to a significant amount of additional content in the revised FAA AC120 – 85A.  Of particular relevance would be Section 2.8 Transport of Special Cargo and Section 3.3.3.2 Tie Down Strap Authorization.  Furthermore the IATA ULDR section OS 6/07 has also been substantially updated, one very significant change being that unlike the good old days when straps could be attached anywhere and everywhere  in the seat track around the periphery of the pallet there are now some very specific regulations  regarding both positioning and spacing of cargo strap attachment points into a pallet, this requirement came about after  testing showed that  in the absence of such a requirement while the pallet itself was strong enough a concentration of  cargo strap attachment points in a particular location could lead to overloading of the restraint latches in the aircraft Cargo Loading System and so enable the entire  pallet to break loose under load.

What does this mean to the average cargo loading operation? Certainly first and foremost the days of guesswork are now gone, anyone putting even one finger onto a strap needs to know what they are doing and why they are doing it.  In an attempt to provide some degree of clarity on this complex subject this article lists three key points:

To sum up, the whole manner that the industry has applied straps in the air cargo loading process over the past 40 years is now up for review.  Of course not everything needs to be thrown out, but what needs to come in is a radical overview of the knowledge requirements around the use of straps.  This article has hopefully covered some of the key points and ULD CARE would certainly strongly recommend anyone in the industry who even remotely comes into contact with straps to take the time to read both the relevant sections of the IATA ULDR 4th Edition and also the FAA’s AC 120-85A.  Of course as further developments in the use of straps arise, ULD CARE will be doing its best to keep our followers fully up-to-dat