The title of this article could have been «Small Items with a Big Job To Do».  Most air cargo of equipment tends to be quite sizeable, so it can be quite easy to overlook the importance of the humble single and double-stud (aka 2 stud) fitting. To do so would be a mistake as these items often make up a critical part of the restraint system and could prove to be the weakest link. 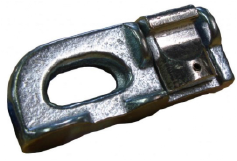 So what is the purpose of these apparently insignificant items of air cargo equipment? Both the aircraft holds and air cargo pallets and containers are extensively fitted with seat track or other fittings into which single or double-stud fittings can be easily inserted and locked. Once properly engaged into the seat track of fitting, a single stud will be capable of 2000 lbs force and a double-stud fitting 5000 lbs force, providing a convenient and reliable device for securing cargo straps and cargo nets to ULD or the aircraft floor quickly and easily without the use of any hand tools.

Nobody in the air cargo industry should be under the impression that just because these fittings are small enough to fit in their pocket that means they are unimportant. Nothing could be further from the truth. An entire air cargo restraint scheme, possibly holding down many tons of equipment whose movement in flight would present a major risk to the aircraft, can be dependent on the strength of these fittings.

If these items are so important, how can the average person working around air cargo know that the fitting being used is up to the job?

Both single and double-stud fittings are governed by standards (ISO 7166 for single studs and ISO 9788 for double-studs) which give extensive guidance on both dimensional requirements and strength performance for these items.

In terms of dimensional performance, a double-stud fitting in particular must meet very very tight limits if it is to fit smoothly and correctly into the typical seat track found on the aircraft floor or on a ULD. Even a small deviation in a number of dimensions on the fitting can result in a misfit, with the fitting either being too loose and therefore possibly unsafe or at the other end of the scale being too tight to fit smoothly into the seat track using only hand pressure.

In terms of strength, double-studs in particular have to perform a very demanding task, with an enormous load concentration around the 4 “feet” of the fitting. Failure of any one of these under load will cause a total failure of the fitting and whatever is attached to the fitting.

So in order to ensure the smooth and safe operation of single and double-stud fittings, a number of important operating principles should be followed at all times:

In addition to these operating principles, the actual applications of fittings shall always be in accordance with designated procedures. These items are not some kind of “catch all” solution to be used in a haphazard manner. Where a fitting is part of a larger item such as a cargo net or tie-down strap, then its application is straightforward enough.  However, when we come to loose fittings, which may apparently be used as and when an operator sees the need, special care must be taken that these items are only used for the proper purpose. 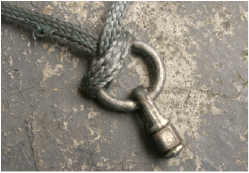 One very common misuse of these fittings is as a kind of temporary repair on a cargo net, as illustrated in this picture.  Unless this process is specifically approved as a method of providing a temporary “on the spot” repair of nets, this method should never be used as the net material is significantly below strength in this configuration. The use of a single stud in a similar manner would be even more risky as it is only 40% of the strength of the double-stud.

Single and double-stud fittings should never be taken for granted, they may be small and they may be relatively low-cost but this does not in any manner diminish from the flight safety critical function they must consistently and reliably perform if accidents are not to happen.