It would come as no surprise to pretty well anybody having any involvement with ULD that contours come in all sorts of different shapes and sizes. The three main variables are the base size, the overall size and the contour and it is this last item that we will address in this article.

ULD contours are not just something dreamt up by a designer, they are very strictly defined in order to take into account the structural dimensions of the aircraft into which they are loaded, and, because aircraft come in many different shapes and sizes, there are a considerable number of contours – remember that every cubic inch of space in an aircraft has value, so it makes sense to squeeze in as much cargo as possible.

There are two important questions to be asked of any ULD being placed into an aircraft:

1)   Is the contour compatible with the aircraft?

2)   Is the ULD actually physically in conformity with the required contour?

The starting point for any ULD contour is the data from the aircraft manufacturer. These days it can generally be said that lower deck containers follow well-established contours but main deck contours can be a very different matter not only varying between aircraft types but also varying according to which position in the aircraft the ULD is located. With data provided by Boeing and Airbus, IATA publishes in the ULD Regulations drawings showing the aircraft contours (Section 2.3). Alongside this activity the ULD Board will, upon the request of an OEM or airline, establish an IATA standard contour, a list of which are published in the IATA ULDR. 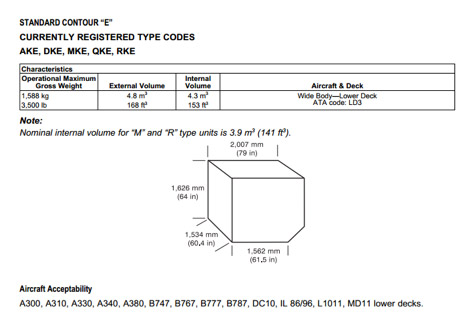 These contours are then published in the IATA ULDR in various formats, the most common being  this type of schematic as found in Attachment A of SS40/1 in Section 4 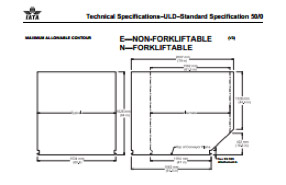 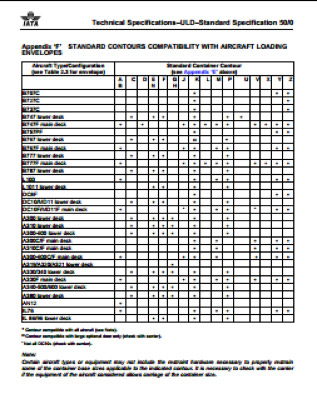 While in Attachment F of this same standard can be found a useful table showing the compatibility between aircraft types and IATA contours, though it should be noted that this must be used with care particularly on main deck ULD as there are many variations.

There are two rather important but often misunderstood components of this information that require some clarification: 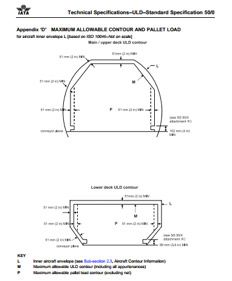 1. The first can be found in SS 50/0 Appendix D, and here the critical point to be observed is that on some sides of the ULD there is a requirement that pallet and net loads have an extra 2″ of lateral clearance inside the container contour. This requirement, which is in compliance with the requirements of the aircraft manufacturers, is an important safety consideration and although it is often ignored by “volume chasing” ULD build up teams, failure to follow this requirement is a safety hazard. 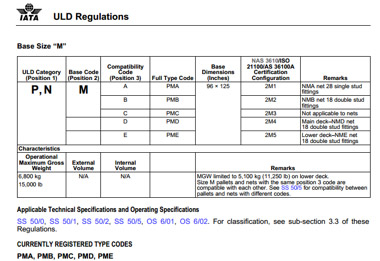 2. The second is that the 3rd digit on a pallet (e.g. PMC) does NOT, unlike for a container, signify a contour, but is instead the NAS3610 classification to which the pallet is certified. This is important information as certain aircraft Weight and Balance Manuals specify that only those pallets certified to a particular NAS 3610 classification may be loaded.

Both these two subjects may sound rather specialist and only for consideration by “techies” but that would be incorrect, they are both important for the safe operation of the aircraft.

It is also important to understand that the 2″ gap that exists between the aircraft hold liner and the ULD, as long as the ULD has its correct contour, is there to allow for smoke to circulate to the smoke detectors in case of a fire. Out of contour loads not only pose a physical risk to hold liners but also could block the flow of smoke and therefore slow the detection of a fire in the hold.

Turning now to the practicalities of contour compliance- or is the ULD actually physically in conformity with the required contour? 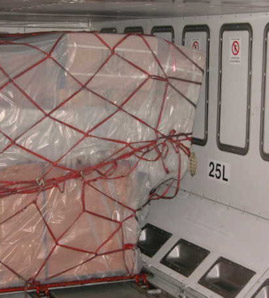 Sounds straight forward enough, but all too often this is ignored, at a cost of damage to the aircraft. There is little enough clearance ( 2 inches to be exact) between the ULD and the hold when the ULD  is in 100% good condition, but with an unserviceable container or a poorly built up pallet load this space can quickly become zero, at which point the ULD is touching the hold liner.

The hold liner may look like some cosmetic finish for the cargo hold, but in fact it has a far more important function, as the white material seen here delivers protection against fire, having an extremely high endurance against fire. However, one hole, even small, can allow the fire to propagate as well as providing an escape path for the fire extinguishing gas “Halon” to escape. Any damage to a hold liner requires immediate rectification before the aircraft can fly and may result in an extensive service visit to the hangar. 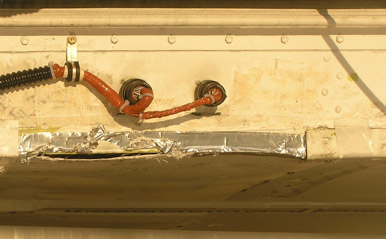 While hold liners are a common damage occurrence they are not alone, door frames are also at risk, this picture shows the damage on a 737F caused by over height containers being loaded without due care.

How can these sorts of damage be prevented?

5% of the solution lies in awareness by operators- from the person who picks up the ULD from the storage area through all the various stages of build up through all the various stages of transport to the aircraft.  Every person should be alert to the need for the ULD to remain in contour and should be prepared to stop the shipment in case the contour looks incorrect, which may be small and seem insignificant or may be large and obvious. In this picture a rather small piece of jagged aluminum on the container has done significant damage to the hold liner.

The other 5% can be solved using technology, through the use of contour gauging devices. These can range from a simple hand held device which engages into the pallet seat track and

uses a simple spirit level “bubble” to indicate when the gauge is in the “GO” position. If the gauge is held from achieving the “GO” position then the load is clearly “NO GO”. More sophisticated terminals may use infra-red beams to measure the contours of built up pallets, on the other hand the use of tape measures is strongly disapproved as it is quite easy for errors to creep in.

Understanding and observing contours is an essential part of ULD operations, from serviceability inspection through buildup and up to the time the ULD is loaded into the aircraft, anyone and everyone working around ULD operations and handling should be aware of the importance of this issue.