If you spend a lot of time on ULD matters, you will probably hear mentioned AC 120-85.  Although this document is almost 10 years old and is widely used in some circles, there are others who may lack an understanding of its contents and purpose. 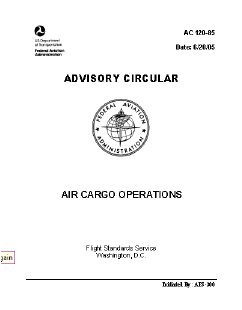 AC 120-85 is a 64-page document created by the US FAA (United States Federal Aviation Administration) under the title Air Cargo Operations. Created in response to the US NTSB (United States National Transportation Safety Board) report into the Fine Air 101 crash in 1997, this document is intended to provide guidance to US airlines in establishing their internal operating procedures for all aspects of air cargo operations.

You might well wonder if there is a similar document for passenger operations or for any other aspect of aircraft operations.  There may well be but in general, such advisory circulars are only created when the FAA wishes to draw special attention to a particular area of aviation operations.

There are of course, underpinning everything, the general aviation regulations, known in the US as FAR’s and by similar nomenclature in other countries. However such regulations are always extremely generic and, apart from a few major components such as engines, will provide broad high-level requirements for the industry, leaving the airline’s and other parties to create the more detailed operating instructions to control their particular activities.

The introduction to this document (which may be downloaded free of charge from the FAA website at www.faa.gov/documentLibrary/media/Advisory_Circular/120-85.pdf) states that it provides air carriers with recommended procedures for managing air cargo operations.  It is not a regulation neither is it the only means by which cargo operations can be carried out.  Airlines may consider that they have a superior alternative solution to some or all of the activities listed in the Advisory Circular.  On the other hand, it is an extremely useful reference document that anybody responsible for managing cargo operations should use in establishing their own procedures.

AC 120-85 makes a good number of very specific recommendations around ULD, including :

All of these recommendations are critical aspects of ULD operations which must be subject to suitable procedures and controls in any airline.

With this document now almost 10 years old, the FAA has embarked on a 2nd edition.  It will contain considerable amount of additional material particularly in regards to handling of special cargo such as large vehicles and will also provide greater requirements where airlines utilize third-party service providers (vendors) to perform cargo buildup and aircraft loading procedures. Although the FAA is a US government body, there has nevertheless been considerable consultation between the FAA and the IATA ULD Panel, with the aim of creating as much alignment as possible between the FAA requirements and the IATA ULD Regulations.

Wherever you may be located and whatever function you may perform, if you have any ULD related activity in your work scope, it would be very beneficial for you to familiarize yourself with the contents of this document and to stay abreast of its future development.